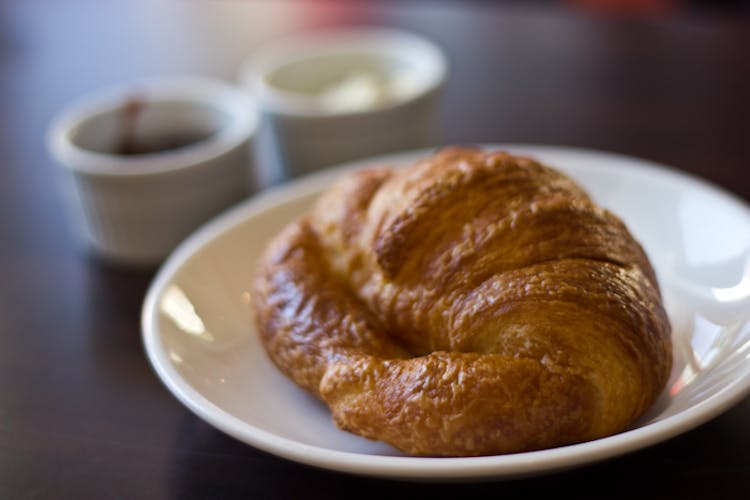 For me, there is no better way to start a day than with just-baked croissants, homemade jam, and a piping hot café au lait. During my time in France, that was my standard breakfast and even now, I find myself craving this combo. The problem is, it's surprisingly hard to find fresh, flaky croissants (made with real butter) in the U.S. Even living in Manhattan, I find it hard to find good ones–they're either too big, too soft, too dry, or perhaps worst of all, stale. I keep tasting, nonetheless...

Which is why I was blown away to find these beauties in Traverse City, at 9 Bean Rows, a tiny bakery down the street from our B&B. We stopped by our second morning, and were greeted by the incredibly friendly owner/baker Jen Welty. Considering the woman bakes most nights from midnight til noon, she was enviably chipper. The still-warm croissants (and pains au chocolat and almond croissants and apricot pinwheels) were cooling on sheet trays behind the counter. Rows of crusty European-style breads, all naturally leavened and baked in a wood-burning oven, lined the shelves alongside beautiful little individual quiches. In addition to a croissant and pain au chocolat–which were by far the best I've ever had outside France–we had to try a goat cheese and spinach quiche. Not only is everything in the bakery made from scratch, but many of the ingredients, like the eggs and the spinach, come from their farm. 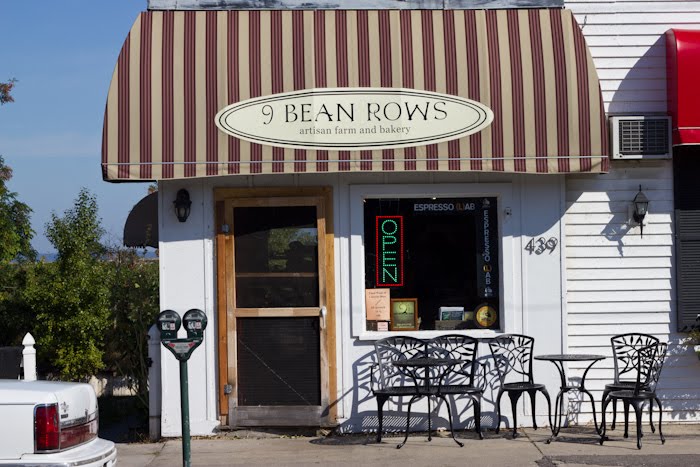 As the sign above the door ("Artisan Farm and Bakery") indicates, the 9 Bean Rows operation extends far beyond the kitchen. While Jen holds down the fort at the bakery, her husband Nic runs their 11-acre CSA (Community Supported Agriculture) farm at Black Star Farms. They are committed to their mission of providing fresh, local, foods to their community year-round via their CSA boxes. Though they've been farming for years, their bakery storefront just opened last November (Jen had previously sold her baked goods at local farmers markets). I just wish we lived closer...I'd happily take part in their mission by enjoying their fresh veggies, eggs, and warm croissants year-round! 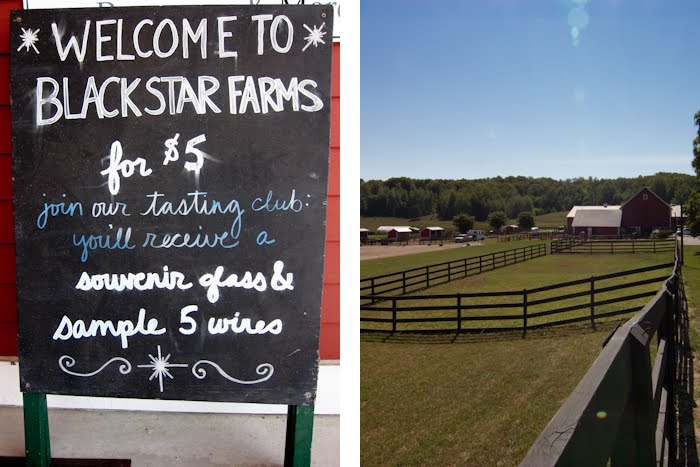 After breakfast, we hopped in the car to go explore Leelanau Peninsula, a sprawling area area northeast of Traverse City that stretches from Grand Traverse Bay to Lake Michigan. (It's also where Mario Batali has his summer home, FYI.) Dotted with vineyards and farms like Old Mission Peninsula (only much larger), Leelanau is home to charming little fishing villages like Suttons Bay and Leland, beautiful beaches, and according to ABC's Good Morning America, THE most beautiful place in America–Sleeping Bear Dunes National Park. But more on that later... 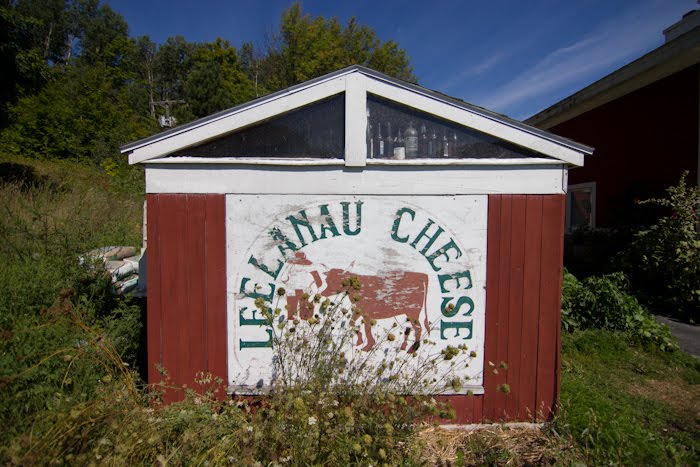 Our first stop was Black Star Farms, a sprawling property home not only to Jen and Nic's farm, but also a winery, creamery (called Leelanau Cheese), an inn, and a horse farm. We walked around the property, tasted some wines (not great) and some cheese (very good), and headed down the road to visit a winery I was especially excited about: L. Mawby. On our way, we passed several vineyards covering their vines in a fine netting. I'd never seen anything like this before, so I asked one of the workers what they were doing. He said with harvest coming up, they were covering the vines to protect the grapes from the birds. It certainly looked like a lot of work, but I suppose protecting the grapes at this time of year would be top priority. 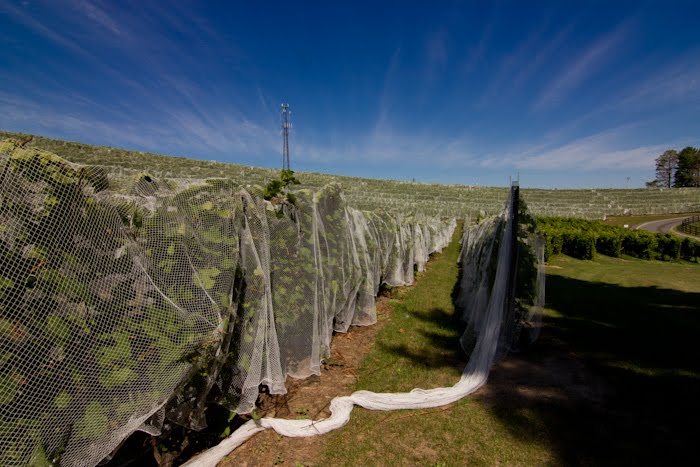 Just down the road from Black Star Farms, L. Mawby was high on my list of things to places to visit because they specialize in my absolute favorite type of wine: sparkling. Tasting bubbly on a beautiful afternoon (err...late morning) sounded perfect. We walked into the tasting room and felt like we had just stumbled into a party. Rock music was cranked up, the place was packed, and everyone had flutes in their hand. They offered two free samples to start, and then you could order two additional 2-ounce pours for $5. Things were off to a good start.

Sitting out on their back porch overlooking the vines, we sampled a variety of bubblies, from dry to semi-dry, a crémant and a rosé, and their vintage "Talismon" (which tasted a bit like liquid smoke for some reason). By far and away, our favorite was their Methode Champenoise Blanc de Noirs–the same one we had sampled at Cook's House. Clean, crisp, with some complexity from the pinot noir grapes, this is the only one we considered buying. Many of their bubblies were on the sweeter side, though the salmon-colored Rosé (which happens to be called "Sex") was still pretty delicious. 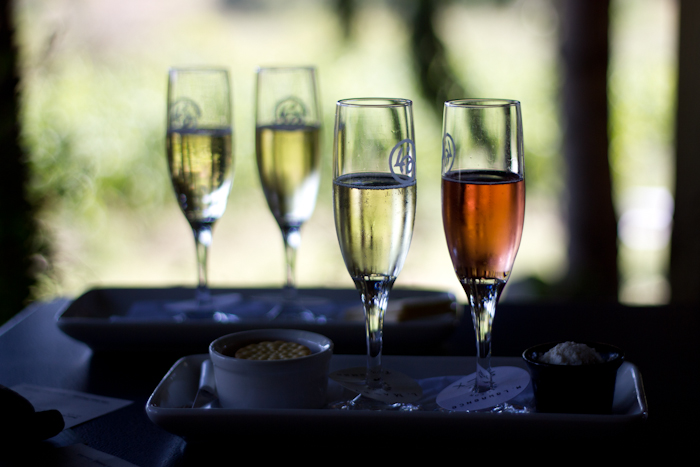 We drove up to Sutton's Bay for lunch, and stopped for lunch at Martha's Leelanau Table, an adorable French-style bistro with a garden patio and a bright red facade. The spinach salad with local dried cherries, blue cheese, and warm bacon vinaigrette was out of this world, and came with a little homemade biscuit. (With all the wine and baked goods on this trip, it's a good thing we did plenty of walking!)

After lunch, we saw a sign pointing to a public beach, so we followed the bumpy road all the way to the water and discovered a beautiful little grassy park. Not exactly a beach, but a perfect spot to stretch out a blanket, read a book, and take a nap. It was another blue sky day, sunny with a cool breeze, and we stretched out by the water watching the boats and jet-skis in the distance. Pretty idyllic, I know. 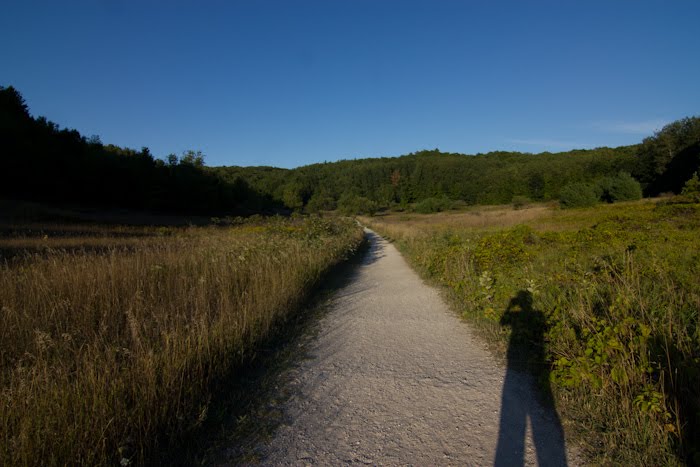 Next stop: Sleeping Bear Dunes National Park, a 35-mile stretch along Lake Michigan full of sand dunes (some as high as 450 feet), hidden beaches, forests, and hiking trails. I had never heard of this place before we visited Traverse City, but every single person we met in the area insisted that we had to go hiking there. One of the guy's at Two Lad's was nice enough to pull out a map and highlight exactly which spots we should visit: Pyramid Point at sunset, the 2.8-mile Sleeping Bear Point trail by day, and the Pierce Stocking Scenic Drive for the best lookouts in the area.

It's hard to put into words just how pristine, and how awe-inspiring, this area is. I've never seen such a diverse landscape, where one moment you're hiking through the woods, then suddenly the dirt turns to sand, you reach a clearing, and stretching in front of you is water as far as the eye can see. As a Michigan boy, Brandon is used to the sheer size of Lake Michigan, but for me it was incredible. I looked out at the shimmering water and felt like I was gazing at the Pacific Ocean. It's just so vast. We made it up to Pyramid Point in time for a gorgeous sunset, marveling at our smallness in light of something so majestic. 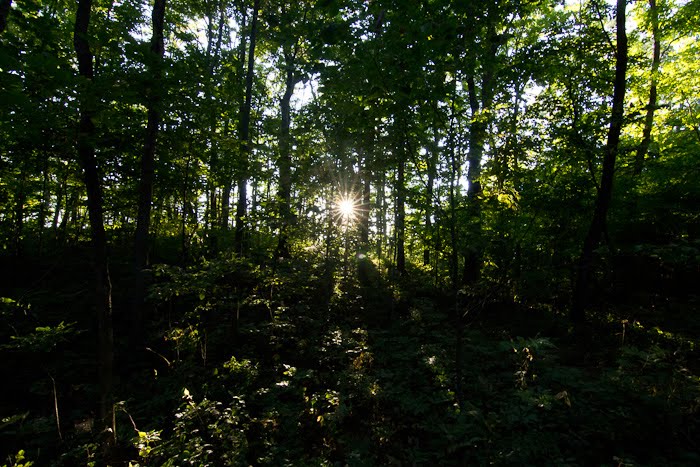 We headed back the next day to do the Sleeping Bear trail, which involved hiking nearly 3 miles in rather deep sand. There were moments where all we could see was white, and then suddenly we would crest a dune, and there was Lake Michigan shimmering hundreds of feet below. We hiked through "ghost forests," areas of long-dead trees that had created eerie formations in the sand, and eventually made it into the woods and under the welcome shade of trees. And then eventually back out to this incredible lookout point, perched 450 feet above the lake. 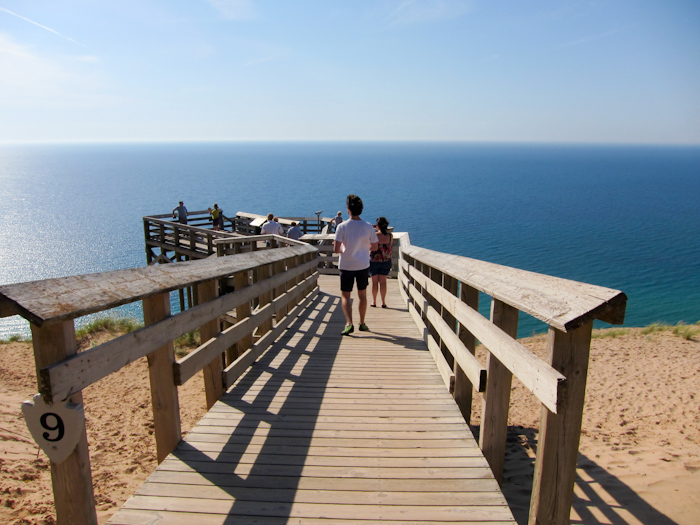 Living in the hustle bustle of New York City, it's so important to get out of the city every once in awhile. To go on a hike, to roll down a sand dune and jump in a lake, to feel the grass in your toes. To taste a peach still warm from the sun. To have moments of sheer wonder. To remember how big God is and to feel humbled. To see the beauty in his creation. To gain inspiration to take back into the city.

This trip was more than just an anniversary trip...it was a lovely reminder to breathe. To stop and enjoy the simple pleasures, like a nap, a good book, or a home-cooked meal around the table with people I love. Which is what The Yellow Table is all about. 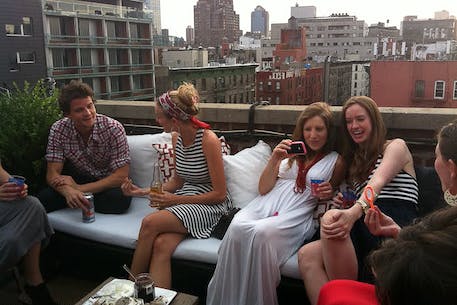 I love this time of year. Blue skies, cooler weather, but still warm enough to eat outside for a few more weeks. Despite the fact that we live in a fifth-floor walk-up (with occasional funky smells in the stairwell), all is redeemed by our little rooftop terrace. The views are pretty fantastic and when the weather is nice, it's my favorite place to have a glass of rosé and watch the sunset. We've had friends up many times and even without a grill, it's a fun spot to host a cookout. The routine... 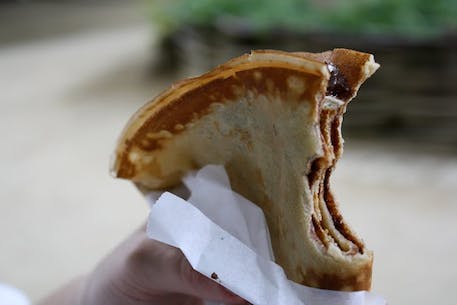 On a gray day like this, I get nostalgic for Paris. There are so many things I love about that beautiful city, and admittedly, many of them are food-related. A perfectly ripe apricot at a summertime market. A flaky croissant from Poujauran. A still-warm baguette l'ancien from Jean Millet (well worth the wait in line). A glass of bubbly on the terrace at Le Fumoir. A whimsically flavored–and perfectly executed–macaron from Pierre Hermé. Perhaps my favorite thing of all, however, is a 3 Euro...