Happy Monday everyone! In the spirit of my "Creating Space" post, I spent some time this weekend by myself, journaling and reflecting on the long, crazy, zig-zagging path that has gotten me to where I am today. I am so humbled by God's faithfulness along the way. It's probably easy to look at the beautiful pictures on this blog and think that life has always been exciting and glamorous. Like I arrived in NYC and just started writing for magazines and throwing dinner parties. (Ha! Not true.)

Though I love to dream about the future, it's amazing the perspective you gain when you take the time to look back and see how far you've come. I have stacks and stacks of journals, and I love to read entries from the exact date one year ago. It's so fascinating to see what I was hoping for or hurting over, and to see how things have resolved themselves over time.

I think I shared with you all that I'm doing this 6-week Brene Brown course on the Gifts of Imperfection. It's abolutely amazing, and I spent some time yesterday catching up on the videos and projects. (Even if you don't do the class, you should absolutely read the book – it truly is life-changing.) Yesterday's lesson was all about practicing self-compassion, something I'm really NOT good at. She asked everyone to try and find some pictures of yourself from days past and to offer words of encouragent to these younger versions of yourself. 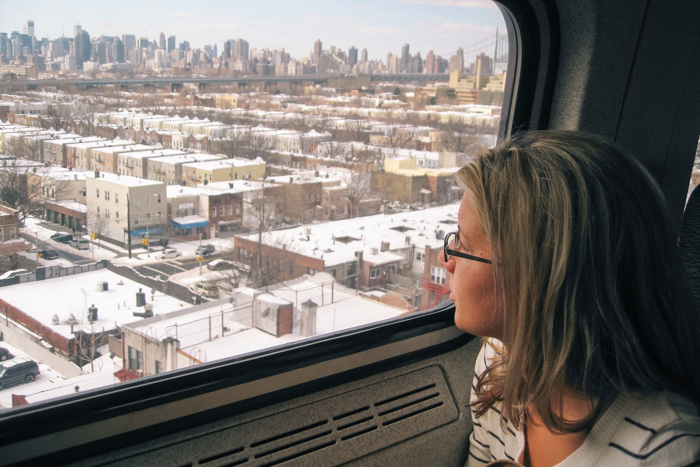 Me, at age 27, moving to NYC with no job and no apartment – just a little money and a lot of dreams.

I went hunting for photos (which is hard because all of my actual photos are at my parents') and in the process found an old journal from college. I read an entry from October 1998 that described my first trip to NYC. The city, at the time, seemed like a dream world to me. So big, so glittery and gritty, so overwhelming and thrilling all at once. As a college freshman, flying here alone to meet a friend, I felt so grown up and independent. Armed with nothing but a guide book and a backpack (I didn't even have a cellphone at the time), I was ready to take on Manhattan. I caught a taxi from JFK, my nose pressed against the glass, watching the twinkling skyscrapers get bigger and bigger as we approached the city. The weekend was full of adventure and misadventure (great stories for another day!), but by the end of my 4-day trip, I was hooked. I knew I had to live here. It took me nine years, but eventually I did just that.

Despite my best attempts to find a job at a food magazine post-college, no doors opened. I must have visited the city a dozen or more times, meeting with as many people as possible in the hopes of finding a job. When that didn't pan out, I spent several years back and forth between France and Nashville, building up my experience as a cook and a writer, and working every type of job from nanny to caterer to wine store salesperson to English teacher to cooking instructor. I started writing restaurant reviews for a (now-defunct) Nashville entertainment weekly called All the Rage and eventually began writing food and travel pieces for The Tennessean and magazines like Intermezzo and Time Out Paris. I went back to France in 2006, to attend culinary school at La Varenne, and decided that once I was done, come hell or high water, I would move to NYC.

Me standing outside my first apartment in Queens in March 2007, with all of my possessions in suitcases!

On March 17, 2007, I arrived in NYC, with a few suitcases and enough money to live on for a month. I had no job and no place to live, but I knew that this was where I needed to be. My mom came with me for a few days to help me find an apartment, and to provide some much-needed moral support. There was a crazy blizzard, and so we ended up getting stranded in Boston and had to take a train into the city. I'll never forget the view of the city from the train window, and the sense of anticipation: "My future is here. This is where I belong."

After several days of looking at grungy, depressing basement apartments in Williamsburg, I found a bright, clean (and affordable!) little room in a shared apartment in Astoria, Queens. Then the job search began...I started pounding the pavement meeting with any editor that would talk to me, and applying for any and every job. My first (part-time) job was as a personal chef, cooking for several families per week. The only problem was, I had to pay for the groceries up front and get reimbursed later. I'll never forget the humiliation of having my debit card declined because there wasn't enough money in my account. I had to call my new boss and ask if she would lend me the money, because I had a cart full of groceries and clients waiting on me. 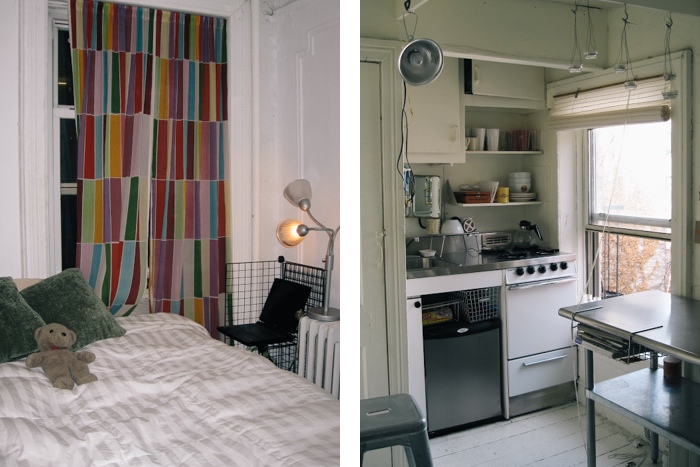 The reality of NYC: spaces are small! My closet-sized, doorless bedroom near Gramercy; my first tiny kitchen.

Not long after that, my savings had dwindled down to about $5, so I decided it was time to find a job waiting tables. I'd worked in plenty of restaurants, as a cook and as a hostess, but never as a server. The thought terrified me, actually. The first few restaurants turned me away because I lacked experienced, but eventually I got really lucky when a brand new restaurant decided to take a chance on me. The restaurant was called Landmarc, a 200+ seat restaurant at the Time Warner Center, and they handed me a black apron and T-shirt, and asked if I could start the next day. I said yes.

The job was hands-down the hardest thing I've ever done. Not only was it physically and mentally draining, but as a 27-year-old arriving to NYC with dreams of working as a magazine editor, the idea of waiting tables was incredibly disheartening. But it paid well, and I figured it was better to do something I didn't love for awhile, than to have to leave the city. The restaurant was open from 7 a.m. to 2 a.m. daily, so I'd have to come in some mornings at 6 a.m. and other days I'd leave at 3 a.m. In between, I continued with my personal cheffing, and eventually began picking up other jobs – testing recipes for Martha Stewart Living and doing editorial work for a travel magazine. It was exhausting, and yet exciting, learning to stand on my own two feet in a city that can kick you to the curb at a whim. 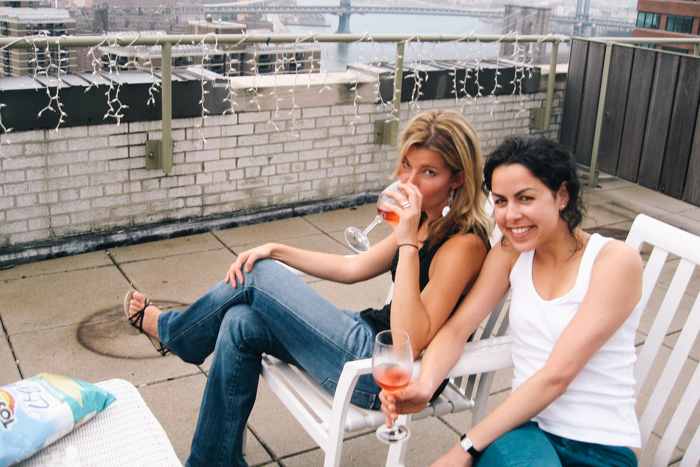 I met my dear friend Rebecca waiting tables. I don't know what I would have done without her in those early days!

One morning, I was working the breakfast shift and as I rounded the corner to greet a new table, I recognized one of the women as a top editor at Food & Wine. My heart sank. I had been in her office the week before, talking about my time in France and sharing writing clips (and hoping to charm her into hiring me!) and now I was pouring her coffee. It was so humbling, but in that moment I took a deep breath, put a smile on my face and greeted the editor like it was the most natural thing in the world. But inside, I wanted to crawl under the table and hide.

God was gracious, however – within 6 months of moving to the city, I had found a full-time job, working as an editorial assitant at a cool new travel magazine. I was able to quit waiting tables (and my other 3 part-time jobs) and finally felt like I was heading in the direction I wanted to go. I moved from Queens into Manhattan, into a 2-bedroom apartment near Gramercy shared by 3 girls. My room was more of a nook - just a bed partitioned off by some IKEA wardrobes and suitcases, with a curtain as a door. Amazingly, I lived in that room for nearly 3 years! I didn't make much money at my first job, but I learned so much, got to travel, and met incredible people in the magazine world. 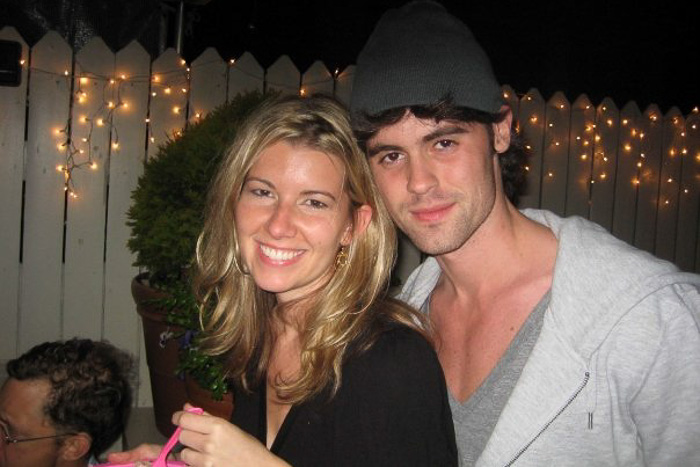 A year after moving to NYC, I met Brandon, who's been the best thing that ever happened to me. Finding a good man in this city is truly like finding a needle in a haystack, but for all you single ladies: it is possible!! We got married two years later, and in the fall of 2010 I was finally able to bring the yellow table up to NYC (and out of storage). If I could have looked into the future years ago and known that I would one day get to marry Brandon, and have my yellow table here in the city, and that I'd get to write a cookbook one day, I don't think I would have believed it. But God is good, and he used each one of my life's meandering turns to teach me something, and to prepare me for what I'm doing today.

I just wanted to encourage you with this: if your life doesn't look the way you'd hoped and dreamed it would, don't despair. It might look totally different a year from now, or two. Anything worth pursuing takes hard work and time. And trust me, the pictures you see on other people's blogs or Instagram feeds that make success look easy or instantaneous, rarely tell the full story.

I always hoped I'd be able to bring the yellow table to the city - it's such a dream come true to finally have the space for it!

What would I tell that younger version of me - the one with wide eyes, moving to NYC wanting to "make it" the second I arrived? I'd say: Be patient, work hard, and don't despair. Dreams aren't made in a day. They are made little by little, over months and years, with a lot of blood, sweat, and tears. I'd tell myself to write down the stories, soak up each experience, treasure each relationship, and when you get knocked down, get back up. I'd tell myself to hang in there: God has good stuff in store, better than you could have hoped or dreamed of. 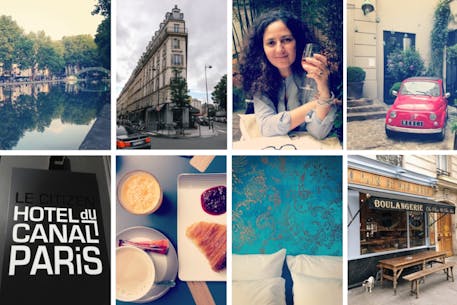 Day 69: My Favorite Neighborhood in Paris (+ a story in Anthology!)

Happy weekend everyone! I must be on some sort of travel kick because last Friday I wrote about Iceland and this week I'm dreaming of Paris. (But honestly, when am I not dreaming of Paris?!) I've lived in Paris several times, and traveled there more times than I can count, and the city mesmerizes me anew each time. Though the center of Paris, with the Seine and its bridges, parks, and monuments is always lovely, I've enjoyed exploring neighborhoods further off the tourist grid my past few...

Even though it's the middle of the winter, I still crave grilled foods. Thanks to my grill pan, I can make summer cookout foods year-round. There's only one small problem: I have no ventilation for my stove. So every time I grill (or sear) meat, my apartment fills with smoke, the alarm goes off, and our bedroom ends up smelling like a barbecue for days. But it's totally worth it. I created these lamb sliders for a couple of reasons. 1) I LOVE lamb. I'd take a lamb burger over beef any day. 2...